While Poster Mountain is known as the place to go for poster conservation and restoration, our expertise and experience is not limited to just posters. We love working on a range of paper based art pieces. So much so that we have started a subsidiary company called Los Angeles Paper Group to cater to a wider range of fine art projects.

Many of the fine art pieces that we receive have limitations that we must work within that are not typical of the usual poster projects. The aim of this blog is to chronicle the exploits and some of the more unusual projects that we work on. One such example is a silkscreen entitled "Monica in Robe, with Motherwell" by Tom Wesselman. "Monica in Robe, with Motherwell" is quite a mouthful and so this piece has affectionately become known simply as Monica in the studio.

It is a large format silk screen about 3 1/2' by 5' that was damaged during shipping. It was rolled and had been crushed which caused creases and distortion in the paper and hairline cracks in the ink. 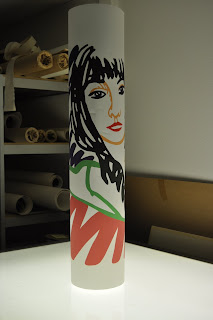 We wanted to flatten Monica and then do some minor restoration work, but the difficulty was that some of the ink was water soluble, the reds in particular. This meant that we could not use a wet mount process because of the possibility of major ink loss.

Fortunately, John has developed a method that allows us to flatten and then use a gelatin process on the paper without soaking it in water.


The first step was to humidify Monica. To do this we created a humidity chamber using our light table and a specially made plexiglass box. Then we layered damp sheets of hollytex paper with blotters so that the art did not have direct contact with the wet sheets. Once sealed the combination of water and heat from the light table allowed the paper to relax and unroll more naturally. 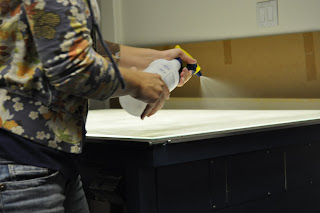 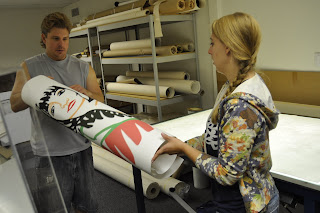 The humidity chamber is then sealed and left alone for several hours. The amount of time varies according to the specifications dictated by each individual piece. 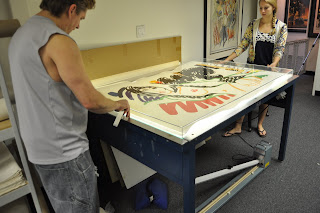 After a few hours Monica had reached the balance point between the paper flattening out and becoming too wet, so it was time to begin the real work.


One of the difficulties that we encountered was the size of Monica. Most pieces can be manipulated by one person with occasional help from an extra set of hands. However, Monica was large enough that we needed two people to maneuver her and many extra hands. Almost everyone in the studio helped out with this project! 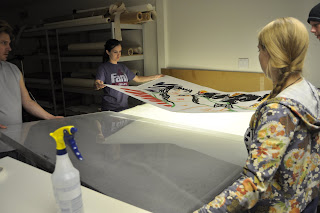 Poster Mountain's work space is divided into two sections, the front area is the office and archive room and the back is the studio space where the restoration and conservation departments are. We had to move Monica from the archive room to the back, tricky work because of the size of the paper in comparison to the doors and hallway.


Once there Monica was transferred to one of the glass tables between two sheets of paper. We did not want Monica to ever come into direct contact with any liquid, so she was manipulated between sheets of paper throughout the entire process. 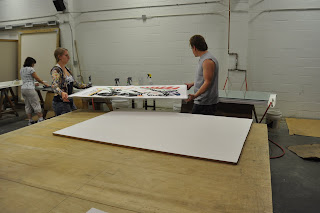 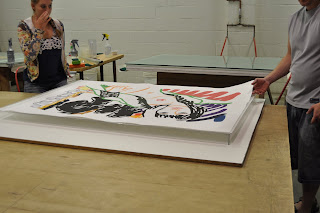 John's gelatin process is a method that he developed and he is the only one who uses it. It allows him to manipulate delicate or unstable pieces of work without damaging the image.

The next step after the gelatin is applied is to temporarily mount the silkscreen to a large melamine board. The melamine board gives the paper a stable surface to adhere to while it cures. 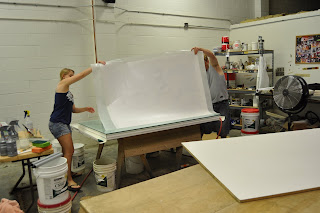 Once the hollytex substrata and the silkscreen were placed on the board we added a hollytex facing to the top. This protects the image and allows the gelatin time to cure while slowing the drying time of the paper. One of the factors that we deal with is the temperature and the heat on this particular summer day was something that John had calculated for when planning this project.

After the hollytex facing was laid on top and smoothed down a sheet of mylar was temporarily put on top. This allowed us to gently remove any air bubbles without damaging and establish uniform contact between the board, layers of hollytex and the silkscreen.


Once all the air bubbles had been carefully squeegeed out the mylar was removed. Then one last layer of gelatin was carefully applied to the edges of the layers of hollytex. This adhered the two sheets of hollytex to each other and to the board, ensuring that Monica would remain flat and not lift off while curing.

The restoration department fixed minor ink losses and any visible damage still left after the humidity chamber and gelatin processes.

Once the restoration was complete the silkscreen was removed from the board and then from the hollytex.


The last thing left after the hollytex was removed was to shoot an after photo!

Voila! "Monica in Robe, with Motherwell" once again in perfect condition!

It should be noted that several crucial steps in our process have been omitted. If you have any questions please feel free to contact us via email at postermount@aol.com or by phone at 818.882.1214. Also check out our websites: www.postermountain.com and www.lapapergroup.com
Posted by Unknown at 1:16 PM No comments:

Poster Mountain is an art restoration and conservation company with a focus on posters and works on paper. We are based in Los Angeles and have been open since 1996.

We love when our clients are able to visit the studio, to see their pieces in progress and meet our team of artists, but we do have plenty of clients in other parts of the world who never get the chance to come here. So we thought we'd start this blog with an introduction.

John A. Davis is the owner of Poster Mountain. He has worked in paper conservation and restoration since 1990. He loves working on large format pieces. John enjoys the challenge and learning process that unusual pieces of art present. Poster Mountain is John's brain child. He sees its evolution and progress as his personal artistic experience. He collects posters and talented people.


Robin Davis has been at Poster Mountain since 2005. The mounting department is her domain. Robin is also in charge of making sure all the flighty artistic types stay firmly rooted to the ground. She is also married to John.

Gabe has worked at Poster Mountain for seven years. He does a little bit of everything from prep to detail work. Unlike most of the other team members Gabe goes where he is needed, whether it is helping Robin and John mount pieces to masking for air brushing.  He is also our in-house handy man. On the weekends he likes to mix vinyl records.

Aaron is out resident airbrush artist. He's been restoring posters since 1995. Before settling down he traveled around the country on a school bus following the Grateful Dead.

Katie is part of the restoration team. She studied art at Pratt Institute and has been restoring posters professionally since 2002. She came to Poster Mountain in 2010.

Melissa directs the restoration department. She studied art and art history at UC Davis and has been at Poster Mountain since 2008.  Her favorite projects are the oddballs.

Chelsea is the administrative master of front-end client control and general peace and well being. She handles the phones and the computer, doing everything from email to accounting and payroll. She is everyone's boss and keeps things running smoothly.  She has a performing arts degree and is thrilled to be able to work in in a creative field. She also enjoys being able to wear shorts to work.

Poster Mountain is made up of a group of talented and dedicated people who love what they do. We value each and every piece that comes to us and love them as much as their owners.