John has, over the years, conserved a number of originals and prints by the mid-20th century artist Alberto Vargas, but we received an unusual example of the artists work the other day. I can't resist giving a brief art history lesson here. Vargas is most well known for his glamorous and sensual pin-up drawings. The Peruvian native was born in 1896, but moved to Europe in 1911. He was greatly influenced by the French artists Ingres and Raphael Kirchner whose works depict their innate understanding of the female form. As WWI overtook Europe, Vargas ended up in America where he spent the majority of his career. Over the course of his life he worked as a portrait artist and illustrator for Ziegfield's Follies, Esquire and finally Playboy. It is his Playboy work that is most well known, combining form and sensuality, but never crossing the line into vulgarity with his images of the female form.


The most recent piece that we worked on is an early example of the well known pin-up artist's work. It is a crayon and ink sketch of a leaping boy from 1909. Vargas was only 13 years old and still living in Peru.  This drawing and a few others from an early sketchbook were featured in a 1943 New York Post article. While it is a beautiful and rare piece, it also had a couple of issues.

The first thing was that it was mounted to a mat board with two pieces of dry adhesive that had a gap between the two pieces. This adhesive caused a discoloration of the paper, but the gap of paper was not discolored making it look like there was a strip of something down the back of the drawing. Additionally it was missing a big part of the top left corner. De-hinging, or adhesive removal, is something that John and our crew are experts at. It is a common sight to see John with a long, thin spatula in his hand, testing the strength of adhesive and tape before he finally settles on the solution to remove it.  The Vargas drawing was adhered to the board with two adhesive panels.

Once the paper was completely removed from the mat board, John could then wash and conserve the piece. This piece was mounted to a piece of acid free paper to help slow the deterioration process.

Washing it was fairly simple. John had tested the crayon pigments to make sure that they were not water soluble. We use a diluted organic soap with most of the pieces that go through the traditional conservation process.


During this process John uses two pieces of Mylar to help maneuver and manipulate the piece. Using the Mylar gives an added layer of protection and since this drawing is more than 100 years old, John was very gentle with it while still making sure to rinse as much of the build up of grime out as possible.

After it had been washed and rinsed, John squeegeed the excess water out. The amount of moisture left in the paper is important. Water causes the paper to expand and then it contracts again while it is drying. You don't want it to dry to fast or too slow because it can cause the paper to warp. Once it had been squeegeed, John applied glue to the back of the paper.

Using the Mylar, John then mounted it onto a paper substrate. The substrate gives us a foundation on which we can repair the damaged corner with a paper patch.

Once the drawing had dried, Antonia took over to repair the paper loss in the corner. Antonia is a master of her craft. She quickly and efficiently replaced this corner by sanding down the edges, tracing out the puzzle piece to fit and then gluing it in. After burnishing the seam, the join between old and new paper was perfect.

After the paper has been repaired, the drawing then moves to Gabe who masks the image so that Aaron could airbrush the background. Unfortunately Gabe finished before I was able to get a shot of him working. I do have pictures of Aaron at work. The airbrushing on this piece is very subtle because it is the background color. However, it still takes very careful matching and multiple layers of very thin paint to beautifully restore the background on something like this drawing.
After Aaron had finished airbrushing the drawing, Melissa did a few minor touch ups so that the stain from the adhesive was less noticeable in the areas that Aaron was not able to airbrush. Once that was done it was ready to be removed from the melamine board. 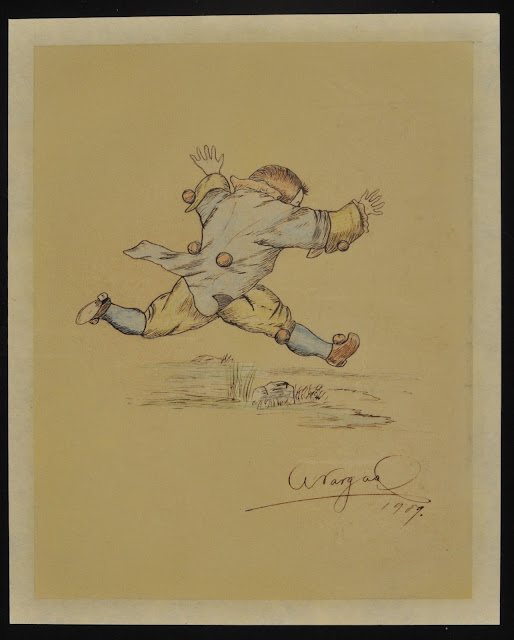 And the finished product is now, not only an historical artifact, but also aesthetically pleasing and ready for the client to frame and enjoy!
Posted by Unknown at 1:18 PM No comments:

"A Magician Among the Spirits" Book Jacket

I love the projects where we get to show our versatility. Poster Mountain, as suggested by the name, is known for our poster conservation and restoration, but we have dealt with a variety of paper based art.  This week's project is the restoration of a book jacket. The title of the book is "A Magician Among the Spirits" which was written by Houdini and exposed the fraud of psychics and mediums. This copy was also signed by Houdini. The book jacket itself was torn in two and showed some considerable wear and tear with minor paper losses along the edges.

The concern with this book jacket were the weak points where it had been folded around the book. Folding the paper creates creases and tension that weaken the paper, thus why the book jacket split along one of those fold lines. John and Melissa laid strips of tissue thin mulberry mending tissue along the back of the jacket, across the fold lines and edges to reinforce these weak points. John also used his isinglass resizing process on the book jacket because he did not want to mount this to another piece of paper, since it needed to go back around the book. The mulberry mending tissue strips provided a base on which to build the paper patches for the small areas of paper loss.


Additionally John placed two strips of hinging tissue, which is even thinner and more delicate than mulberry mending tissue, along the front of the edge that had torn and its counterpoint. There would be a lot of tension on these two fold lines, so it was important to reinforce these so that neither would rip again.


Once all the strips had been prepared, John and Melissa began to wash the book jacket. It was important to line up the edges of the torn sheets perfectly, so that they would join together again seamlessly. This also meant that John and Melissa had to be extra careful when washing and manipulating the jacket, so that nothing moved or left a gap.

After both the front and the back had been completely soaked, John and Melissa spent several minutes straightening out edges that had folded on top of themselves and making sure that the join between the two pieces was still straight.

Once all of the edges were neatened out, Melissa squeegeed out the excess water and then rinsed out the grime of multiple decades using diluted soap and gently massaging the paper through Mylar sheets.

Washing and rinsing is a constant back and forth process. We are as concerned with the back as the front of the paper, thus why you see us flipping thing over and repeating each step of the procedure for the back.

After making sure that as many of the pollutants as possible have been removed from the paper, it is rinsed for the final time. John squeegees the excess water out, so that the paper does not retain more moisture than necessary.


John carefully removed the Mylar sheet that had protected the book jacket so that he and Melissa could lay the strips of reinforcing paper down. They had to be very careful with this because they needed the strips to lay down flat and straight, but if they pushed or pulled too much they could rip the pieces of tissue themselves. John always advises that then working with wet paper you start in the center and move outwards, so that any air bubbles or creases are pushed out as you move towards the edges. They also made sure that the strips were farther out than the edges, so that Melissa could add in paper to the areas that needed it on top of the mulberry mending tissue reinforcing.


Once all of the strips had been added to the back of the jacket, John and Melissa placed a sheet of hollytex paper on to the back. The hollytex acts as a barrier between the melamine board so that we can later remove the book jacket from both the board and the hollytex.

Once the hollytex is on top of the book jacket with no air bubbles, John and Melissa flip it over and then move it over to the board. Then they take the Mylar sheet off the top and add in the tissue strips for the front of the jacket. 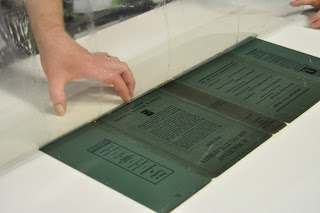 
After the piece has dried completely, it then goes to Melissa for the restoration work. We use vintage paper from our collection that has accumulated over the years, either found by us or donated by our clients, to create paper patches. Melissa traces the edges of the areas of paper loss where she is going to add new paper in. Once she has all of them traced, she cuts out each patch and then miters the edges of the old and new paper together and carefully glues it down to form a seamless join. There were about 8 areas of paper loss, all of them were around the folds.


After Melissa had finished patching all of the holes, she began to restore it. The client did not want this piece to look brand new. Melissa was not trying to make it perfect, instead she blended in the patches and reinforcing to match the rest of the jacket.


Restoration is the last stop before the piece is removed from the board. This is always a nerve wracking process for me to watch, but as usual John is cool, calm and collected. And pulls it off perfectly.


Because this was being wrapped around a book we had to get several after shots for our records. Both before it went on the book and then after. John called them glamor shots, but they do show off our work rather nicely.


It should be noted that several crucial steps in our process have been omitted. If you have any questions please feel free to contact us via email at postermount@aol.com or by phone at 818.882.1214. Also check out our websites: www.postermountain.com and http://www.lapapergroup.com/. Also, please feel free to leave comments or questions on the blog!