Part 1 ended with this section of the screen drying after being backed to a piece of Okawara paper.
Paper mounts at first glance are deceptively simple, because it just seems like gluing one thing to another. However, the amount of moisture that is applied to the backing and the piece itself (as with just about any paper conservation process) is key. John told me the story of how many years ago one time he had over wet the Okawara backing for a rare, mint condition poster while mounting it. A few days later, as the paper contracted while drying, it ripped and tore diagonally across the poster taking an entire corner section off. (Now you also see why we let things dry for several days before we begin restoration or release them to clients.) They were able to fix it and make the poster look perfect again, but the moral of that story was that even when something looks like it is going to be easy, things can go horribly wrong.

Fortunately, nothing went wrong with this screen and we were able to remove it from the board without any drama. (We had about 700 photos to go through for this blog and it is heavy on the images this week, but I just couldn't resist.)

We always have multiple projects going at once, but while we were working on this screen project we were also mounting one of the largest billboard posters we have ever done. That's it in the background, a massive 7 UP poster from '69 called the Uncola Butterfly. It made a very colorful background for several of these photos, so I thought it would be fun to include it.


The excess Okawara was cut off, leaving just enough of the paper backing to make it easy for Melissa to trim it precisely along the original edge of the screen.

The edges of each piece probably started off straight, but over time as the paper dried, small bits have flaked away leaving a pretty wavy border for Melissa to follow when she was slicing away the Okawara.


Because the sections had already been backed, which addressed the original tearing, Melissa decided that it was overkill to put glue on the entire piece to reattach it to the frame. Only applying a thin border of glue also minimized the risk that any change in humidity would cause the piece to warp again because it would allow  the paper a certain amount of flexibility.


Katie and I helped Melissa keep the glue off the adjoining sections by holding strips of plexiglass over them.


Once the outer area was covered in glue we then positioned each piece, making sure that the overlapping images and the silk edging lined up.


To hold the piece in place and make sure that it fully adhered to the frame, we lined it with strips of plexiglass. These help us maintain an even distribution of weight across the area, especially when we have to spread out the weights across a larger area like this.


As many of you know we maintain a very large database of images, both for our reference and for our clients. We take before and after photos as well as progress photos. And as I mentioned at the beginning of this post, we took 700 photos for this one project. However, when choosing the 30 or so photos that would be included in this blog, I realized that we hadn't managed to take an after photo. Part of that was because it is so big, it won't fit in our photography studio and so we have to climb up onto a ladder to get decent photos. This is a hassle because the girls, including myself, loath climbing up the ladder and so that leaves the task to John. Well, once it was finished it was folded up and stored out of the way for the client to come collect it and we just never got an after photo. We have asked the owner to send us one and we'll update the post if they do. But for now, this is our final photo. However, as you can see there were huge improvements in the tears after it was backed.

One of the many things that I love about my job is that it is a constant learning experience. In the last year we have gotten so many weird and interesting projects that have expanded our knowledge by leaps and bounds. Last year a client brought in a six panel Chinese folding screen and it was a huge, time consuming project because it was the first time we had ever done anything like that. (See the blog posts for that screen here) A few weeks ago a client brought in another Chinese folding screen. This one had been torn by a small child and 3 of the 4 panels were warping around the tears because of a change in humidity.

The client didn't want the tears perfectly restored, just repaired so that they weren't so obvious. The biggest issue was the warping. If we could get the paper to relax and flatten back out again, the tears wouldn't be so glaring. The screen as a whole was too big to fit into our humidity chamber.  We spent a couple of days brainstorming. This included a discussion about creating a room with plastic and pvc piping or sealing off the kitchen to give us a space where we could build up enough humidity to get the paper to relax. After a few days of what felt like banging our heads against a wall, John finally started poking around the edges with one of his sharpened spatulas and had the  idea of taking each panel off the frame one at a time and working with them that way.

Melissa started along the edges, working her way carefully and slowly around with the spatula to separate the top layer of paper from the lower layers of rice paper.

The way that these screens were built is with an internal wooden lattice frame with layers of very thin rice paper glued together underneath the top layer with integrated paper hinges that made the entire screen light weight and easily portable. Once we got a look underneath the image we realized that there had probably been some conservation and repair work done on this screen in the past. Strips of the original paper were missing or torn and there were some tissue patches holding together previously repaired tears.

John and Melissa agreed that most of the thin layers of paper underneath should be stripped away and a new Okawara backing applied to the panel. This would hopefully minimize the tears, fix the warping while also stabilizing the whole panel for the future.


We were conserving 3 of the 4 panels, so Melissa took those 3 off the frame and peeled away the damaged paper lining for all of them before we began the conservation and backing of the panels.

Each individual panel would fit into the humidity chamber easily and were left in there for several hours for the paper to become malleable.


We have a lot of work space in the back, but getting large scale pieces like this into the back from the humidity chamber sometimes looks like an obstacle course. We did make it back to the capillary table though, where a piece of clean, dry Mylar was taped completely flat.

After removing a few stray patches, Melissa applied glue to the back.


Ok, this is where the Mylar being taped down to the table comes in. We were paper backing this piece with Okawara to stabilize it. Our paper backing is done by gluing the outer edges of the paper to the melamine boards and then gluing the back of the piece. But because we had humidified the piece instead of washing it, there was nothing holding it to the Mylar and thus we couldn't move the panel and Mylar over to the backing. So we brought the backing to the panel.

We have occasionally used this technique before and it has worked, but that moment when you bring the board back up is always terrifying. However, as you can see from the photos we were successful.

Melissa then spread another piece of Mylar on top and squeegeed the panel down to make sure it was thoroughly adhered to the Okawara substrate.


After checking that the large tear through one of the corners was aligned properly, this piece was left to dry over night before starting the next step.


We'll have the conclusion up soon!

I just realized that it has been more than a month since we had put anything up. I'd apologize, but we have been so busy in the last few weeks that I just haven't had time to think about getting a new post out. Fortunately some of the projects we have been working on will become blogs over the next few weeks.

However, I do have a few things to tide you over just a few more days until our next full blog post.

At the top of my list is the large Mucha poster we restored last summer. When we started to blog this project I couldn't find any of the before pictures we had taken, which irked my inner perfectionist to no end. However, while searching for something else a few weeks ago, I stumbled across the photos. I have absolutely no idea where they popped up from but I saved them and have updated the first part of the Mucha series. Which you can view here: Mucha Episode 1 Updated

We have also been working on another Chinese folding screen that will be up in the next few days, but here is a teaser: 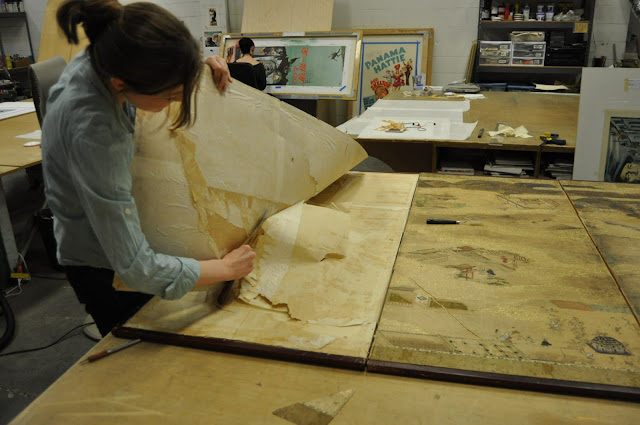 Check back in over the next week to see how this project turned out!

We have been very busy with the fine art side of the business and hopefully will have a pretty cool Warhol piece to show you as well as some interesting original comic book illustrations. Stay tuned!