Some of our favorites...

I think I mentioned in one of the Mucha posts that we are currently working on a video blog. We have several interesting projects going on right now, but those are going to become video blogs, so we're holding off on posting them until everything is finished. So, more to come on those. However, to tide you over we are putting up the before and after photos of some of our favorite restoration projects. These are some of the most dramatic restorations Poster Mountain has performed over the years.

Our first dramatic restoration is of a 1910 Chancellor Cigar ad that was glued to cardboard. 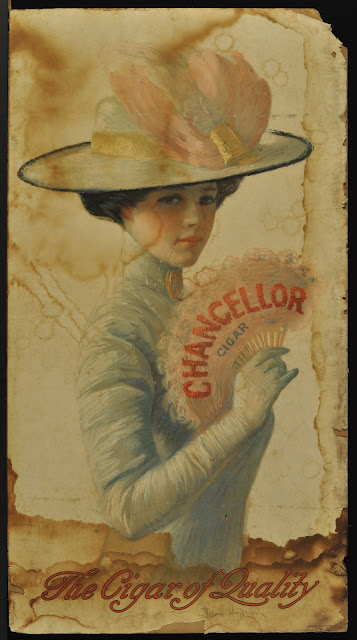 It was demounted from the board and then remounted to a linen and Masa substrate before restoration work was performed to replace missing paper and deal with the staining of the paper. 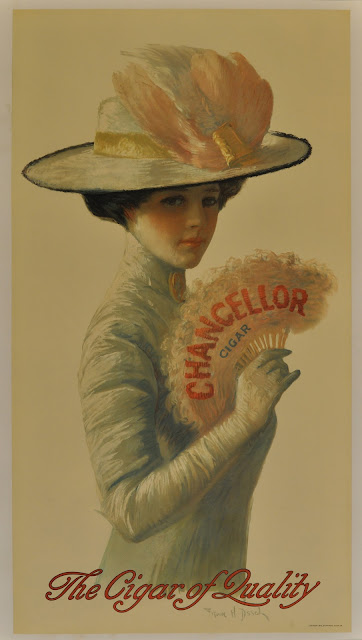 Up next is a Northern Pacific Railroad advertisement that had some water staining and fading of the colors. 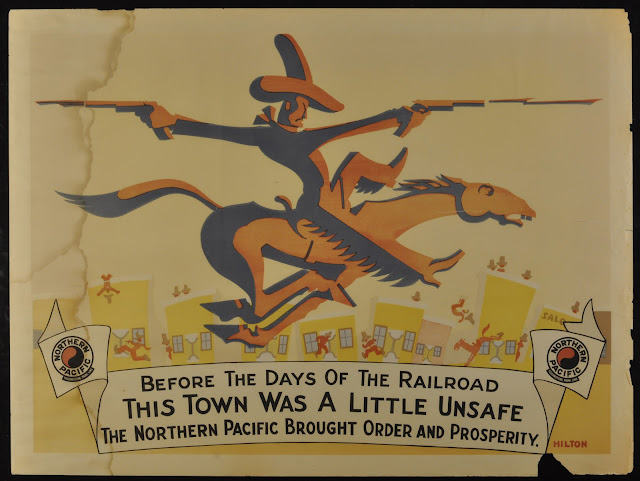 It was linen backed and then airbrushed to cover the water damage and restore the original colors. 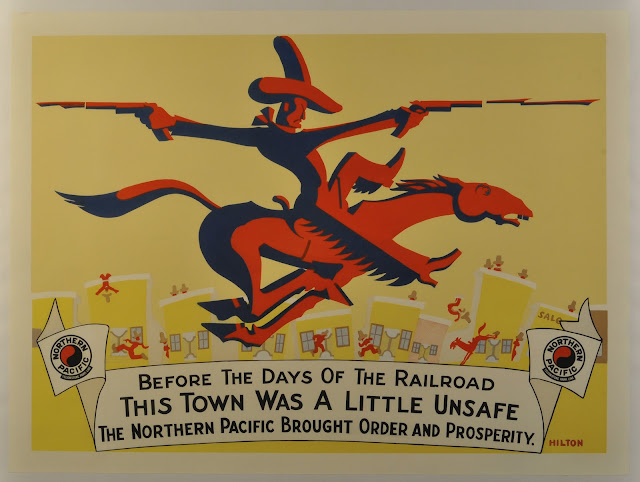 Alberto Vargas was the artist of the next poster, a 1941 Moon Over Miami that was missing almost all of its border. 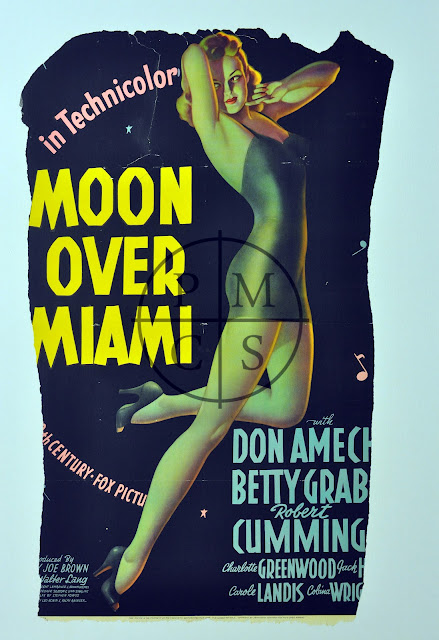 Vintage paper was used to add in what was missing to return this beauty to her former glory. 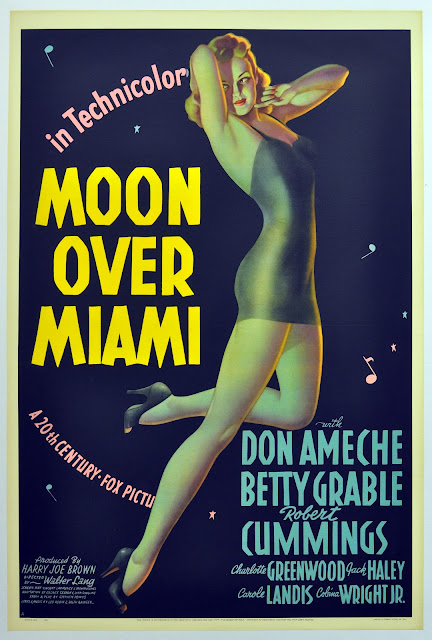 The next piece arrived at our studio glued to a board and covered in varnish. 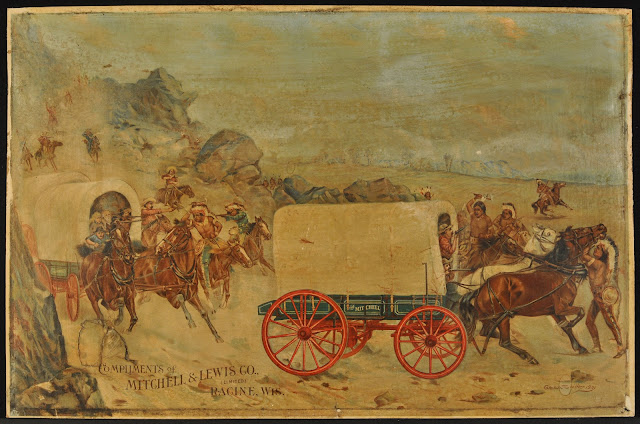 It was demounted and then remounted to a linen backing. Then countless hours were spent putting the mountains and sky in the background back in, not to mention small details in the figures. 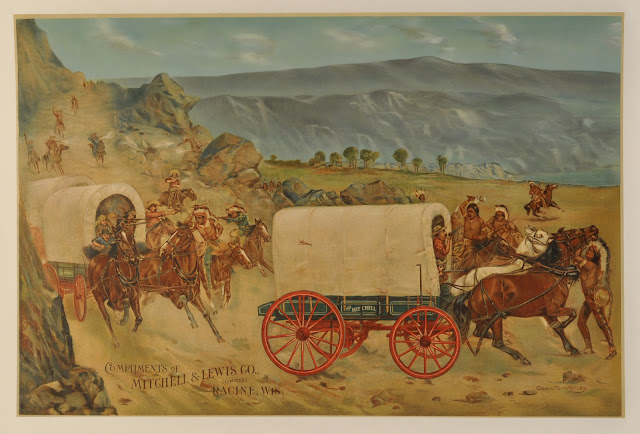 The next 3 before and afters are crate labels. We are located in Southern California, which produces a lot of fruit. The crate labels from old turn of the century era California citrus crates have become a collectable item and we regularly restore missing corners and sections that were ripped when the label was taken off the crate. 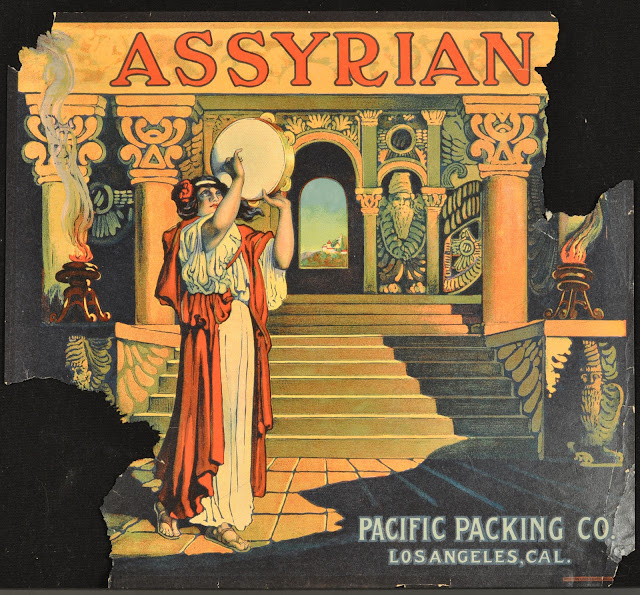 Crate labels are not backed, instead they go through our isinglass gelatin process that allows us to temporarily work on them on a melamine board. We put thin patching tissue under the areas that are missing paper to support the paper patches. 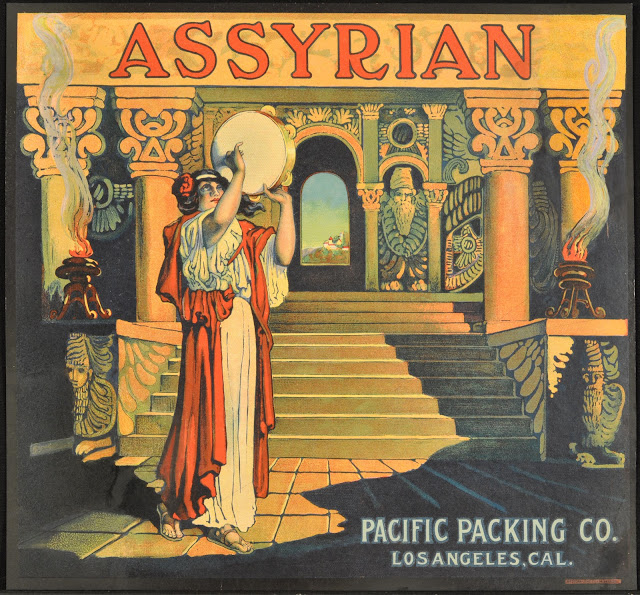 For the size of these, which is roughly 10 in. by 8 in., we spend a lot of time prepping and restoring these small pieces. 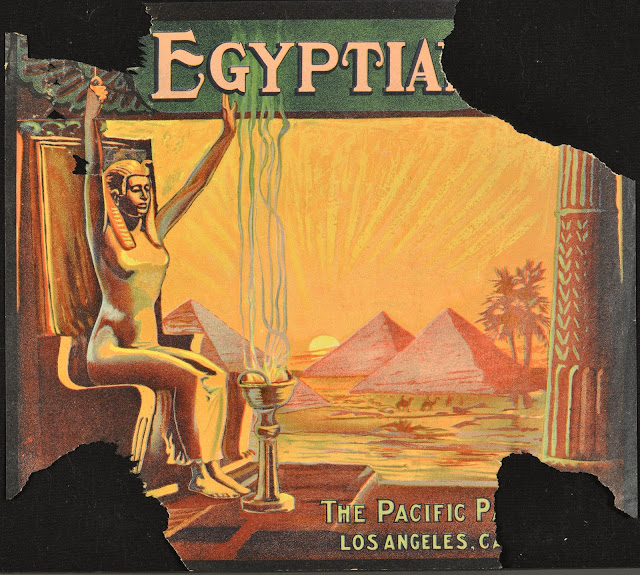 Each fruit company had its own specific crate label, often with slight differences between different types of fruit. Some of the most detailed advertisements we have seen have been these small crate labels. 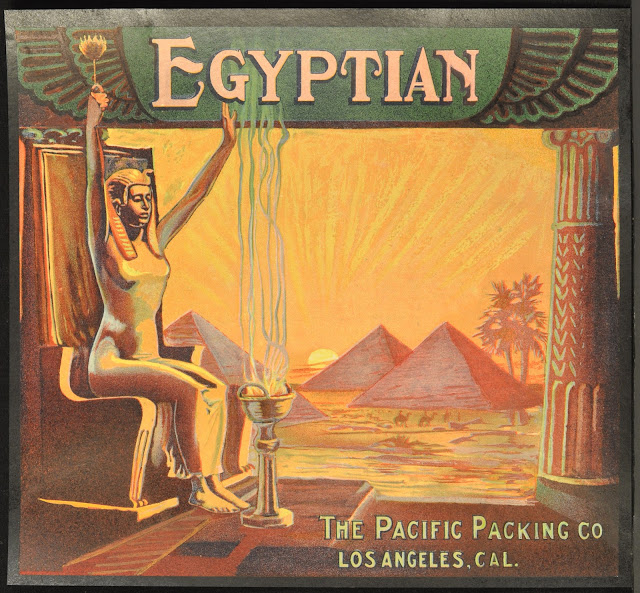 John found it ironic that this crate label of a pirate ship looks like it has been shot full of holes. 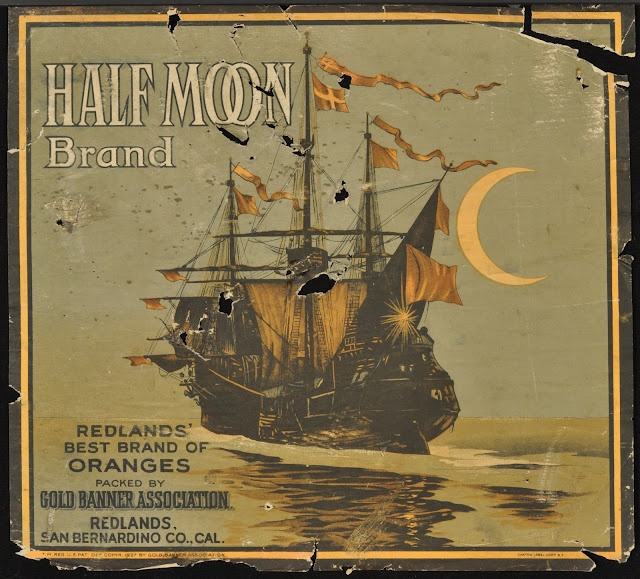 Although it didn't look like that once we were finished with it! 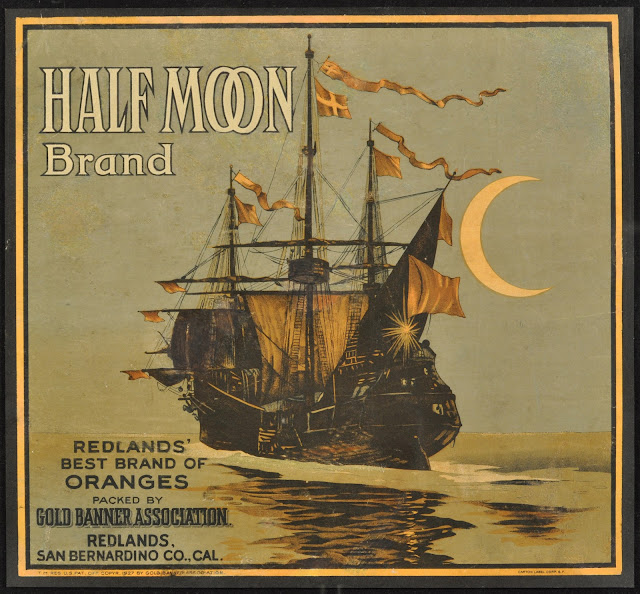 The next project is one of my personal favorites because I got to work on it when I was having a particularly rough week and coming in to see a Toulouse Lautrec resting on my table brightened my spirits. When this piece was taken out of the frame it looked like an accordion. 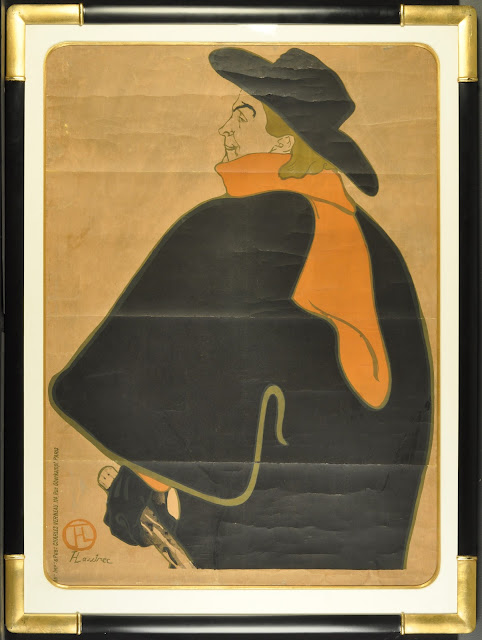 It was demounted from the rotting linen it was originally backed to, then remounted to linen and Masa before we began restoration work. 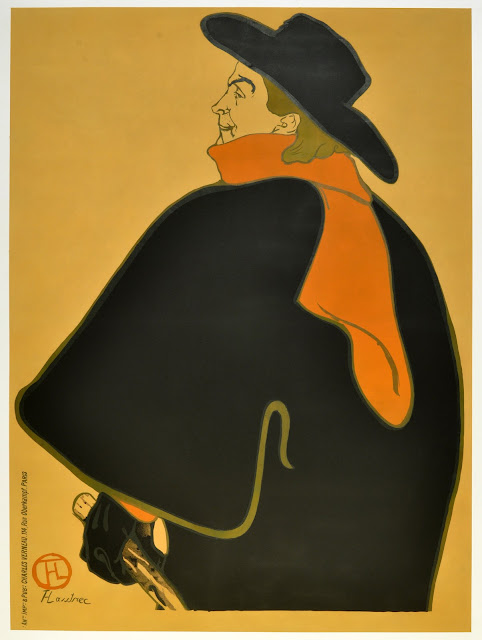 The next poster was one of the most badly destroyed posters we have ever seen, although John still says the one that the cat peed on was worse. It is a campaign poster for William McKinley that was glued to a board. And as you can see from the picture the glue had started to affect the pigment of the paper and the inks. 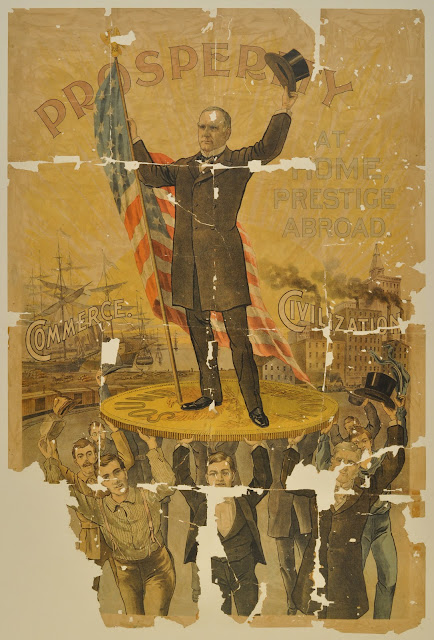 Melissa spent hours and hours working on this, but her hard work paid off! 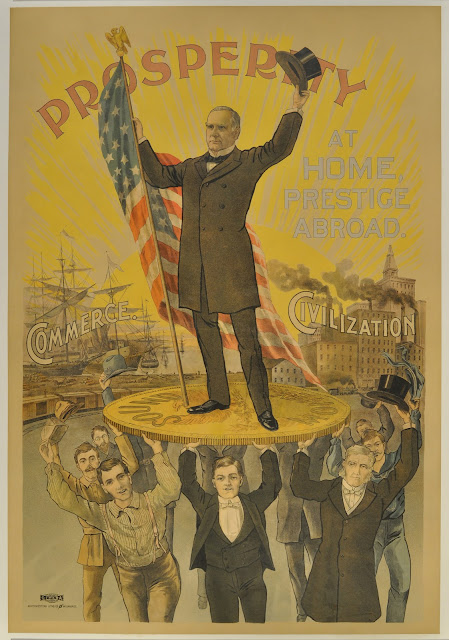 This 1938 Robin Hood 3 sheet came in as a 2 sheet. It was missing the entire top 3, as well as a few more chunks here and there. 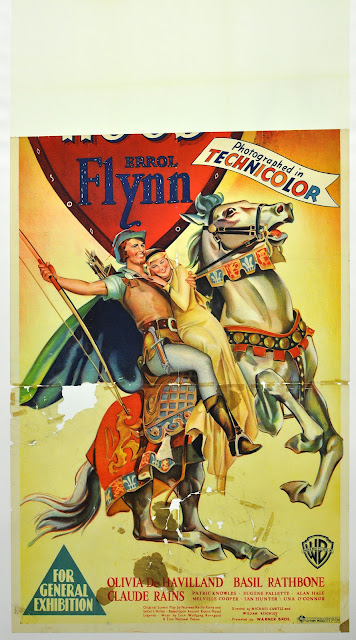 We used a blank piece of vintage paper from a different 3 sheet to add back in the missing section and then recreated the whole top third. 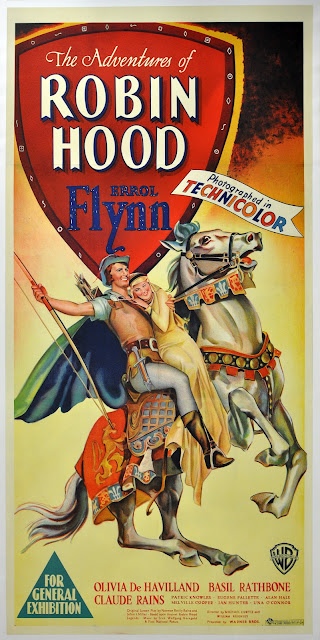 And last but not least, a little gem we have just finished. It is a small 1896 Alphonse Mucha litho for yet another of Sarah Burnhardt's shows.

Demounting this was one of the most frustrating demounts I have ever done, but the end result was well worth it!

I checked the number of images that we have in the database and we have over 10,000 posters/fine art pieces entered into the database. These are just a small slice of some of our favorites that we have gotten the opportunity to work on over the years!

The pictures that we put up of each stage of conservation and restoration are only a fraction of what we take and those don't cover everything that happens to the piece during each new process. Restoration in particular is a time consuming process that takes a lot of patience. So even though you see the condensed version, each process takes hours and in the case of large pieces like this Mucha, days.

The last Mucha post finished with prep, so the next step was masking for airbrushing. Masking and airbrushing go hand in hand, as Gabe works with Melissa and Aaron to decide which areas need to be airbrushed. The criteria for airbrushing is usually determined by how extensive the visible damage is and the wishes of the client. In this case the border area and the large patches in the image were being airbrushed.


Gabe started out by masking for the border shot. He uses a combination of masking tape, acetate and paper to cover the areas that aren't being airbrushed. Gabe starts out by covering more than what he needs to and then goes in with an exacto knife and cuts out the precise shape of what needs to be protected and removes the excess.The pictures below look like he has left parts of the image uncovered, but those are protected with clear acetate because Gabe can cover larger areas and cut out the edges that are detailed or intricate more efficiently than with tape.

Once the patches along the border had been blended in with the rest of the paper, the next area that the boys began work on was the large patch in the lower right of Sarah's cape and the one in her torso.


After airbrushing comes the detail restoration work. This means that all of those little cracks and small patches are restored by hand using water color and water color pencils. Melissa spent countless hours building up layers of color in very small areas to create a uniform surface.

And here comes the final reveal! After a complicated demount, issues with the facing and multiple days of restoration work, the Mucha is finally finished!

I know that I say this with just about every project that we put up, but it is true for just about every project. We were so honored and excited to work on this piece of history. Mucha's work still has an impact on art that we encounter everyday, from posters on buses to LA architecture and works in the Getty. To be a part of that history is exhilarating.

It should be noted that several crucial steps in our process have been omitted. If you have any questions please feel free to contact us via email at postermount@aol.com or by phone at 818.882.1214. Also check out our websites: http://www.postermountain.com and http://www.lapapergroup.com/. Please feel free to leave comments or questions on the blog!
Posted by Unknown at 7:35 AM 2 comments:

I always feel that by calling these episodes they should start out with an epic introduction like the Star Wars movies...


A long time ago, in a galaxy far away... A Mucha has been linen backed. It is about to lose the facing that held it together during the troubled times of the demount. So it must stand on it's own during prep, masking and airbrushing until it can finally return to it's full glory.

Too much? Yeah, you're probably right. Back to reality...


We left the facing on overnight because if we had tried to pull it off the poster while any area was still damp we could have done a lot of damage. The next morning I pulled it off inch by careful inch. We work at an angle while doing this because it puts less strain on the poster while the facing is rolled away.


When we got down to the last corner we realized that we had made a mistake. We had used a piece of hollytex that had previously been used and had some airbrush paint on one side. John thought that we had rolled the facing out with the airbrushing on the opposite side of the poster. Turns out we were wrong. However, unlike the woman who took it upon herself to restore the Ecce Homo in Spain we are trained professionals who can handle this. It is also one of the reasons that we use materials that are reversible.

I grabbed my favorite tool, my shaped and sharpened palette knife. I was able to shave off the paint without harming the ink or paper.


Before we could begin any prep work, the varnish had to be dealt with. You can see the varnish in the pictures below. The areas that look foggy or glazed are the ones that have varnish on them. You can also see that not only is it affecting how glossy the print looks, but in some areas it has changed the pigment color. If we had left the varnish on top any pigment we put on the poster would be sitting on top of that varnish and it would never look seamless. John tried several different types of solvent before he found one that worked to remove the varnish.


With the varnish taken care of, the next step was prep. For how old this piece was and the conservation processes it had been through it was in good condition. The border needed the most attention, but there were also some large holes in the image that I patched using vintage paper.


The areas where paper is missing and the white Masa substrate shines through are the obvious issues, which we fix by mitering in vintage paper patches. What you don't notice until you start running your hands over a piece are all of those hairline cracks, like the ones I talked about during the demount process. If we had left those unattended when we airbrushed anywhere near them they would have stood out like a sore thumb.  So, we used a filling compound for those cracks and any holes that were smaller than a quarter.

After prep comes masking and the task of restoring this beautiful piece back to perfect condition. But to see that you'll have to check back tomorrow for the last installment of our Mucha series.

I also want to let our loyal readers know that we have begun work on a video blog. This project will probably take a while to come to fruition, but we have begun putting short segments up on Facebook, so you can go to https://www.facebook.com/pages/Poster-Mountain-Inc/98837694662?ref=ts to take a look and while you're there go ahead and like our Facebook page!


It should be noted that several crucial steps in our process have been omitted. If you have any questions please feel free to contact us via email at postermount@aol.com or by phone at 818.882.1214. Also check out our websites: http://www.postermountain.com and http://www.lapapergroup.com/. Please feel free to leave comments or questions on the blog!
Posted by Unknown at 9:43 AM No comments: