An All Consuming Japanese Screen

Last month we took a hiatus from the blog because we were so busy with a wide range of projects and I did promise that I would put up some of those projects. The post this week is about a late 19th or early 20th century Japanese screen. The client brought it in with a host of problems including the fact that the two end panels were completely separated from the other four, the silk brocade that was around the border was rotting and there were several holes punched through the screen.

We did not begin documenting this until after we had reattached the end panels. Trying to cover this in chronological order is proving difficult, so bear with me if I skip around a little. One of the most amazing things about this screen was that it was made completely from wood and paper without any nails. They did this using an interlocking grid system for the internal structure. The panels and the hinges were made from layers of paper glued together.  Melissa, John and I brainstormed until we were able to come up with a way to make new hinges out of paper so as to remain true to the piece.

We started taking pictures after we had redone the hinges. The interior hinges had originally had gold paper covering them, so over the new hinges we created I glued tissue paper. We first did this with the panels at an angle, as you can see from the pictures. I tried to leave enough space that when the panels were folded up it wouldn’t strain the tissue. But I learned my lesson when we folded it up and several areas cracked and I had to redo them.


Melissa and I also scraped off all the old brocade. (It was lovely, but blue and didn’t really work with the piece in my opinion) Taking the brocade off was a huge process as well. It didn’t come off cleanly because it was rotting.  Underneath we found what looks like old newspaper.


I had a heck of a time trying to find authentic silk brocade that was appropriate for the screen, but eventually settled on a gold and brown cherry blossom pattern with an off white ribbon to break up all of the gold.

While I was off gallivanting around LA trying to find the appropriate fabric, Melissa and Katie worked on restoring the areas that we had repaired earlier.  Most of these were in the gold areas, which we thought would make it easier to cover the holes, but paint did not want to stick to the screen. There were signs of previous airbrushing, as well as patch jobs, and now we know why.

In order to attach the new brocade we used a heat-based fabric adhesive. We cut the fabric into strips and then folded over one edge and then used the ribbon to seal the other edge so that nothing would fray. We cut the strips down to the size of each panel so that they did not overlap and bulk up the interior of the hinges.

After we had finished the border, we enlisted Aaron and Gabe to help us with a small amount of airbrushing to cover up the patches in the gold that we hadn’t been able to cover.


And here it is in all its finished glory! 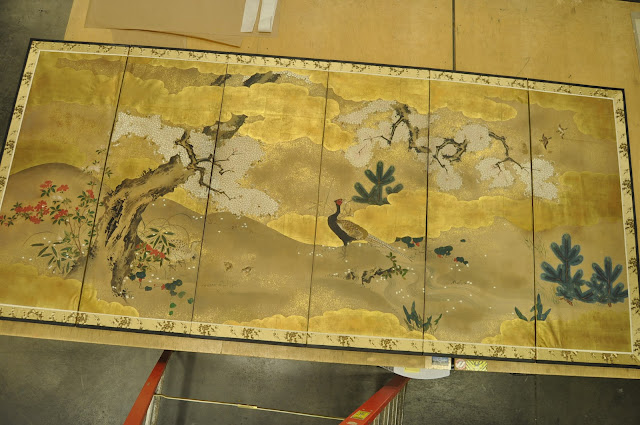 Once the gold had been fixed our next step was to fold the panels up completely. As I previously mentioned when we folded the panels up for the first time the tissue paper I put on cracked in a couple of places, but other than that the hinges we made held together beautifully. We did suggest to the client that he either hang each panel of the screen or put it on a small shelf to prevent any of the hinges from breaking again.


Melissa and I were overwhelmed for a couple of days, but we both love the knotty problems that take all of our concentration to solve and this project fit that bill!


It should be noted that several crucial steps in our process have been omitted. If you have any questions please feel free to contact us via email at postermount@aol.com or by phone at 818.882.1214. Also check out our websites: http://www.postermountain.com and http://www.lapapergroup.com/. Please feel free to leave comments or questions on the blog!

Posted by Unknown at 7:53 AM No comments:

Alright, folks, this is it, the last part of this series of posts. When you last saw the map it was still wet and had just been mounted directly to canvas. Once it had dried for several days we removed the hollytex facing. Its a relatively simple process of slowly pulling the hollytex back away from the paper, but it can be a little tense as the idea floats through your head that with one swift jerk you could potentially tear something. Fortunately we didn't have that issue and the hollytex came off cleanly, leaving behind a newly linen backed map.

As you can see from the photos, there were quite a few pieces missing, so Melissa spent several hours filling the most noticeable ones. Since there was no paper substrate here, she did not use old paper, but a textured filler.


At Poster Mountain we really pride ourselves on the quality of our work. When you put color in a hole it just looks like color in a hole. However, with the filler, Melissa was able to go in and blend in the color on top to create a more seamless look.


The edges are still ragged, but that is part of the charm of this century old map. And now it is stabilized and can, hopefully, make it another century! 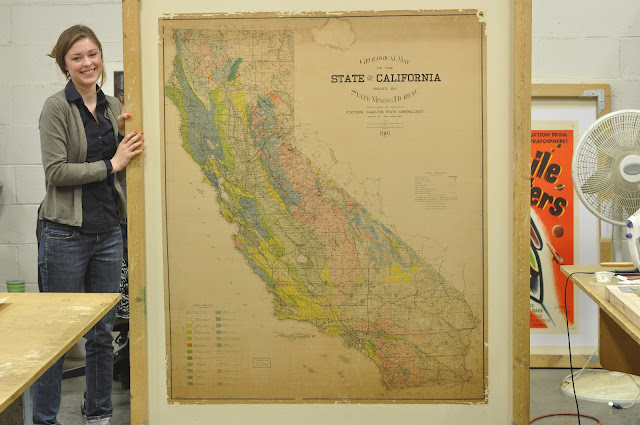 It should be noted that several crucial steps in our process have been omitted. If you have any questions please feel free to contact us via email at postermount@aol.com or by phone at 818.882.1214. Also check out our websites: http://www.postermountain.com and http://www.lapapergroup.com/. Please feel free to leave comments or questions on the blog!
Posted by Unknown at 9:00 AM No comments:

We finished yesterday with the map drying face down on the melamine board. It dried over night and the next morning was ready to be removed from the board. To remove it from the board we insert long, thin and very sharp spatulas between the hollytex and the board. This particular piece made a nerve wracking crackling sound around the edges.

John even got a short video! The two large cracks are Robin stapling canvas to the frames, the smaller crackling noises are from the paper as the hollytex separates from the board.

With most of the pieces that we temporarily mount on hollytex, the spatulas are long enough to reach the half way point, but this piece was so big that we had to lift it up to get to the middle section.

Once free of the board, Melissa and I carried the map over to the conservation area and trimmed the excess hollytex off the edges to make it easier to handle.


While Melissa and I trimmed the edges, Robin put glue onto a piece of framed canvas. However, she did not put a paper substrate down. We mounted this directly to the canvas like it had previously been.


One more round of washing and rinsing before John spread glue across the back of the map. Remember that at this point it still has the hollytex facing on the front holding all the small pieces together.


John carried the map, stuck to a piece of Mylar over to the canvas that he had set up on one end to make it easier to get the map onto it, then flipped it back onto the table and used the squeegee to even adhere the map to the canvas. After removing the Mylar, without pulling up any pieces I might add, the only thing left to do was let it cure for a couple of days.

How are we going to get the hollytex off the front? Come back tomorrow for the last installment!

It should be noted that several crucial steps in our process have been omitted. If you have any questions please feel free to contact us via email at postermount@aol.com or by phone at 818.882.1214. Also check out our websites: http://www.postermountain.com and http://www.lapapergroup.com/. Please feel free to leave comments or questions on the blog!
Posted by Unknown at 10:52 AM No comments:

When we left off yesterday the map had been mounted face down with a hollytex facing and was in the process of drying enough for us to remove the old linen backing on it.


We do a facing on the pieces that have backings that need to be removed and its always an experiment to find the right time when the piece has dried enough to hold it to the hollytex and the board, but still damp enough to be able to peel off the old backing.  John made a small incision in the middle of the linen for us to begin pulling it off the map. The nice thing about this old linen was that it was easy to pull it into strips that came off easily.

The middle section of the map was not difficult for the most part. We kept the linen as flat against the map as possible to prevent it from lifting up off the hollytex.

While the center of the map, although missing a piece here and there, was pretty stable the edges were another thing altogether. For a while it was a no breathing zone around that map as we carefully stripped off the linen while leaving each individual piece of paper that wanted to flake off where it belonged.

In some areas around the edges we left them until the very end so that they could dry a little bit longer, making it a little bit easier to remove the linen without taking the flaking paper with it.

There were parts that just didn't want to stay where they were supposed to, so we kept the linen close to the paper and used a palette knife to hold the pieces in place if necessary.


We finally got it all off! Huge sigh of relief!


The map was left to dry face down over night. What will we do next? I guess you'll have to come back tomorrow to find out!