We have put up so many contemporary silk screens recently that I decided that for this week's post we needed to do some fine art. So we are, as this week's title suggests, documenting another Vargas drawing that John worked on.

This particular piece is a sketch on tracing paper. When we received it the paper was extremely creased, most noticeably in two sections that ran right though the drawing. Because of the nature of the tracing paper and the fact that the medium Vargas used was watercolor pencil, washing this was not an option nor was using John's isinglass technique. Any moisture that moved across the surface could potentially take the whole drawing with it. So John devised a strategy that used a limited amount of moisture, the flat press and the heat press to remove the creases.

John set up a small humidity chamber on the glass topped tables using blotter paper and a silkscreen frame to lift the drawing up above the wet blotter. The reason that he did it on the slanted table in the back instead of our light table in the front is because he had already attempted to humidify this piece several times without seeing enough relaxation in the fibers of the papers. So John wanted to leave the piece in for a much longer time than usual and was worried about the build up of condensation in the plexi-glass box dropping onto the drawing. Thus the solution of using the slanted table so that any condensation would roll down to the edge of the plexi-glass without harming the drawing.

While the drawing was relaxing, literally, in the humidity chamber, John cleaned the flat press. It is an old cast iron press that is ridiculously heavy (I have never tried to pick it up, nor do I want to. It just looks heavy as all get up.)


Once the drawing was damp, John removed it from the humidity chamber. He placed it between two sparkling new sheets of blotter paper and then sandwiched those between two pieces of melamine. Then the whole thing went into the flat press for a couple of hours to begin to dry flat.


The drawing was placed directly in the middle of the melamine boards, so that John knew where to position the boards in the press. After tightening the press down we again left the Vargas Girl for a few hours.

The blotter paper wicked out some of the moisture in the tracing paper, however there is very little air movement between two piece of melamine, so even though the Vargas Girl had been in the press over night it still wasn't completely dry and left in that state it would take days and days and days. So John removed it from the flat press and put it into the heat press for a quick dry.

At this point the Vargas Girl has gone from damp to heat in a short period of time. Temperature and humidity can have extreme affects on paper, so once John had removed it from the heat press he left it between the layers of hollytex and blotter paper and put the flat side of the plexi-glass box on top so that while the drawing cooled it would stay flat and remain so after we were finished working on it.


After the drawing had cooled Melissa took over. The creases in the paper had lead to some pigment loss which the owner wanted fixed. We use watercolors and watercolor pencils for almost every restoration project because they are water soluble and can be reversed if necessary. Here it was just coincidence that the medium Vargas used was the same thing Melissa used. Watching any of the artists in the restoration department work is usually incredible. This case however was particularly beautiful because it required such a light touch, which Melissa has.

Here is the final photo of the drawing! Creases and damage now completely gone and this beauty restored to her former glory! 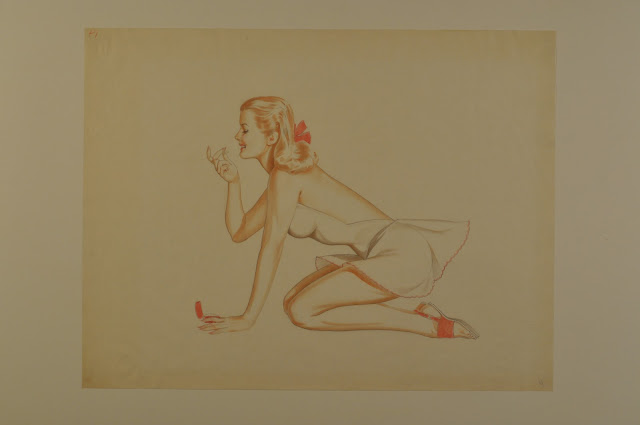 The Imaginarium of... Poster Mountain

So, we took a little hiatus the last couple of weeks because we have been swamped with projects in the back. Some of them you'll get to see on here over the next couple of weeks!

For this week's blog we have a cameo appearance. Erik is a silkscreen collector who came in for a couple of days to experience what we do here at Poster Mountain. He worked with John in the conservation department on a couple of projects. This particular one is a silkscreen poster of the movie The Imaginarium of Doctor Parnassus. It was printed  by Mondo and the art is by Martin Ansin. It was donated by another collector and it will be given away via an inter-group lottery on the Facebook Silkscreen Poster Fans and Artists group.

The poster had some damage that was probably caused while it was rolled.


Erik got to work on a couple of posters, but this one was particularly fun because it is a silkscreen and Erik collects silkscreens. (He also got to work on a Tyler Stout Iron Man poster!) He started out by getting the poster wet. When I looked through the pictures Erik's body language suggested to me that he was scared of getting the print wet. John pointed out that that's how I looked the first couple of posters that I worked on too. And I will say that it is a scary thing to start spraying water all over paper and ink. John, as usual, just makes it look easy.


After getting the paper wet and spraying it with a soap solution, Erik placed another piece of Mylar on top and through it massaged out some of the creases and damage.

After some mumbo jumbo, a little bit of magic and sacrificing a couple of virgins the poster was soft mounted to a melamine board to cure flat.


Erik did a wonderful job working on this print. It now lays flat and all of the damage was fixed during the isinglass process. And we loved having Erik in the shop for a few days. Stay tuned in the next week or two to see Erik, John and Gabe printing a two color silkscreen right here in the studio! 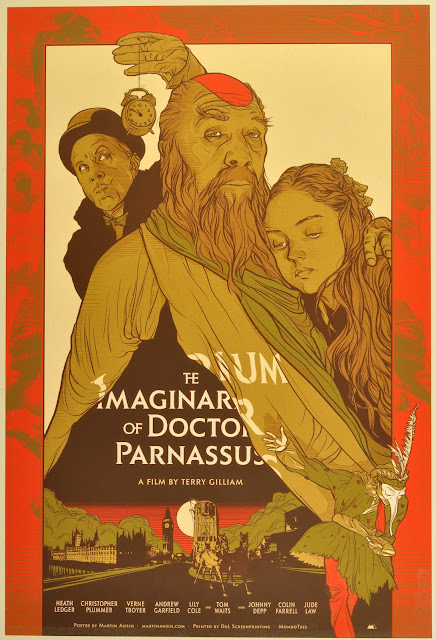 It should be noted that several crucial steps in our process have been omitted. If you have any questions please feel free to contact us via email at postermount@aol.com or by phone at 818.882.1214. Also check out our websites: http://www.postermountain.com and http://www.lapapergroup.com/. Please feel free to leave comments or questions on the blog!
Posted by Unknown at 2:01 PM No comments: