THEM (you know, the movie about the giant ants)

This week we are chronicling what might be a standard conservation project, except that the client had an unusual request. He wanted the poster cleaned, but didn't want to linen or paper back it, instead after the poster was washed he wanted us to refold it. The poster is a 1954 "Them" one sheet. 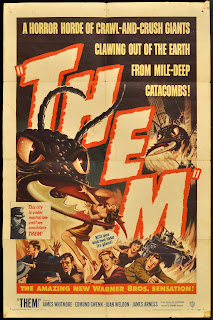 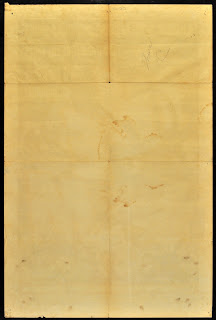 The poster came in with tape stains in the corners and a pretty visible stain right in the middle. The first step was relatively straight forward. John used an organic solution called Orvus to remove as much of the build up as possible from the poster. He sprayed front and back with the solution, then rinsed both sides. The water that John squeegeed out was pretty grimy. Since this poster was not being mounted, and would not go through prep, John had to make doubly sure that there were no creases and that the fold lines were laying flat while the poster was wet.

Once the poster had been rinsed, John used chloramine-t to remove the giant stain in the middle of the poster as well as any other stains and discoloration. I am using the pictures of the back because the improvement in paper color is pretty dramatic. After the chloramine-t had been washed out and the excess water squeegeed out, John removed the Mylar sheet from the back and placed a piece of hollytex on the poster.


With the hollytex on the back, John moved the poster from the mounting table over to a blotter. After removing the Mylar from the front of the poster, John sandwiched it between another piece of hollytex. He also added two sheets of blotter paper on top and bottom.


The point of all of these layers was to protect the poster and keep it as flat as possible in the press. Speaking of which, the next step was to put the poster into the heat press. This press is a vacuum seal heat press and as it was explained to me there is a large bladder inside that sucks out all the air once it has been closed. We can set the temperature to heat to a certain point and between that heat and the lack of air, the poster goes through a speedy dry cycle.


When John opened the press a little while later something had gone horribly horribly wrong. Well, not horribly horribly, but when we opened up the press there were two dents on either end of the poster. Most likely the blotters had a little extra moisture in them or they weren't flat enough and when the vacuum sucked all the air out it caused these two dents.


Mistakes happen, so while this put a hitch in our giddy-up, it is definitely something that could be remedied. So, we washed the piece again and using brand new, completely flat blotter paper the poster came out perfect from its second go round in the heat press. After that John placed it under even weight so that it could cool slowly. If we had left it to cool on its own it is likely that the paper would have curled or warped like it was starting to do when we took it out of the press the first time. And as you can see the poster had cooled slowly enough that it was still flat once it was removed from the humidity chamber.

With the poster finally cool, John, as per the client's wishes, refolded the poster.


Since we didn't do any restoration and very minimal conservation work on this piece the most noticeable difference is the change in the paper color. 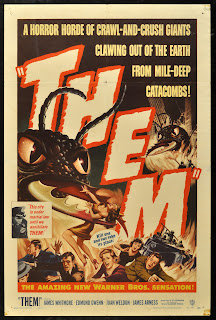 This project was atypical because the client did not want this piece linen backed. The reason for this is because some posters are worth more if they are not backed due to questions of authenticity. A few years ago there was a poster restorer who was faking 1930's and 40's horror movie posters by taking newly printed images and applying them to old paper using accepted restoration techniques. This included linen backing the item, which can hide or disguise some of the signs that a poster is a reproduction.  (He actually did nothing illegal until he passed the reproductions off as authentic. The man who was behind these fakes has been prosecuted and is now serving time.) This shook the movie poster collection industry and has had  affected it long term by lowering the value of some linen backed posters. So, for the sake of tracing this poster's authenticity our client had us just do the minimal amount of conservation work to get the poster back to a stable condition.

Authenticity is an issue with any type of collectable. At some point in the next few weeks we'll be putting up a detailed explanation of an authenticity report and how we go about authenticating posters.

Email ThisBlogThis!Share to TwitterShare to FacebookShare to Pinterest
Labels: conservation

So, we took the poster back to the mounting table to put the facing on it. John started out as he usually does by rinsing and squeegeeing the poster. The areas that had the most amount of restoration were the black and the red and those were the areas that we were most concerned about, but when John squeegeed the excess water out there was not any visible loss of pigmentation.

The edges of the poster were extremely delicate due to previous conservation (having been mounted, demounted and remounted already) and they had also been attacked by silverfish who had nibbled the paper thin. Because of these two issues we did lose some of the overlap, the point where each new piece of the poster overlaps  the previous piece (thus the name). However, since the overlap points are not seen this was not a huge issue.


John added the secret sauce to the poster to enable us to put a sheet of hollytex on the front of the poster temporarily. Once the hollytex was flat against the poster we moved it over to the large (and seriously heavy) melamine board. We mounted it with the hollytex and the poster face down against the board, so that the tissue on the back was exposed.


John kept an eye on the poster as it began to dry and we did see some small bubbles between the tissue, confirming John's instinct to remove it from the back. If we had left it on the poster could have had air bubbles in between that, as previously mentioned, would have meant that the poster could not be displayed  without the risk of possible damage.

So, it was time to take the tissue off. We honestly were not sure how easy this task would be. Demounting depends on several factors including the poster paper, the glue and the backing. Fortunately for us, the tissue came off beautifully in one smooth piece.


The first piece of this large format poster was our tester and it went swimmingly, so we used the same technique with the next 5 pieces. On each piece the hollytex facing provided a foundation for the poster and the tissue backing came off easily.

After the pieces had dried, John removed them from the board and trimmed the excess hollytex off. He also removed the hollytex from the overlap points so that when we mounted each piece there wasn't more hollytex than was necessary.


We then began to prep the canvas that had been mounted to the wall earlier. Robin, John, Aaron and I put down paste and then the masa paper.


When the linen and paper were prepped Robin and I began to wet down the individual pieces before putting glue on them. If the posters had not had the hollytex on the front we could have been in trouble because without it, the pieces might not have been stable enough to survive another rinse.

Mounting something of this size is a big team effort. While Robin and I prepped each piece, John and Aaron mounted them. The first piece is pivotal because it sets the angles for the rest of the pieces. After the first piece goes on, the rest is mainly lining up the edges of the image. We were extremely careful when removing the Mylar so as not to peel the poster off of the paper or to take the hollytex off of the poster. (We'll get to the hollytex facing in just a bit.)


When mounting each part of the poster we use the Mylar to place it on the substrate. The glue does not dry too quickly, so we do have some leeway when positioning the pieces. We are able to press it gently against the masa substrate and then move it around to line up the edges of the image.

As you can see at this point the poster still has the facing on each individual piece. The facing, pieces of hollytex that were originally bigger than the individual components of the poster, were temporarily bonded to the front of the poster to stabilize them during the mounting process. To remove the facing John and Robin carefully peeled the hollytex away from the poster.


There was a ton of static electricity left over in the sheets of hollytex the day that John and Robin were taking these off. So much so that they were sticking to the poster even after being removed. John said that he shocked himself several times while peeling them off.

With the normal isinglass process the solution evaporates without leaving a residue. However, because of the hollytex facing on these, the solution was trapped and did leave a slight surface film behind. John used an enzyme to remove this. The enzyme did not damage the poster or remove any of the previous restoration.


Here is the finished product. This project was pretty unique in Poster Mountain history because of the technique that we used to mount it. There is a minor amount of restoration to be done on it, small areas in the black, but for the most part this piece came out beautifully!  Not too shabby for a 116 year old poster with two mounts and demounts under its belt already. 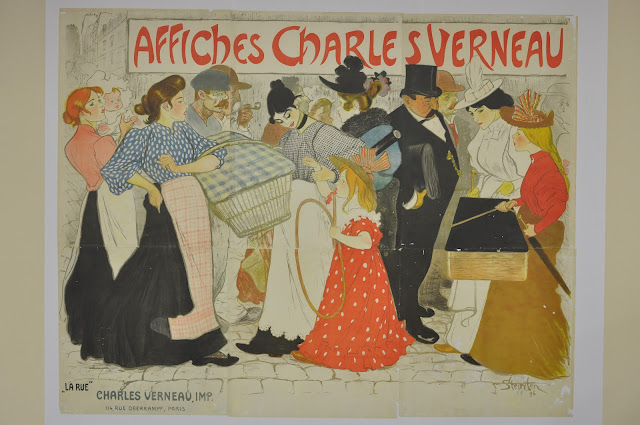 It should be noted that several crucial steps in our process have been omitted. If you have any questions please feel free to contact us via email at postermount@aol.com or by phone at 818.882.1214. Also check out our websites: http://www.postermountain.com and http://www.lapapergroup.com/. Please feel free to leave comments or questions on the blog!
Posted by Unknown at 9:01 AM No comments: